Not every cartoon that Filmation came up with could be branded a classic but it's 1979 interpretation of Flash Gordon is just such a thing.

I mentioned to Lou Scheimer what a fan I was of his Tarzan series (coming to DVD wooooo!) and his daughter mentioned that Scheimer himself loved Tarzan. It showed because the series was such a nice translation of the book character. I'm guessing Scheimer was a fan of Flash Gordon as well..... 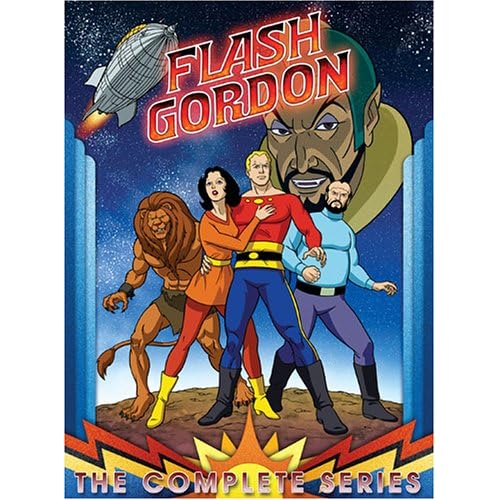 The series follows the Flash Gordon mythos rather faithfully and includes many adult themes. A movie was also put out using this series that actually showed Ming was behind the Third Reich (!), sadly that well remembered movie is not included.

What is included with The New Adventures of Flash Gordon is commentary on three episodes, a documentary and that character profile crap nobody needs. I really liked the two postcards included, I'm a sucker for that stuff.

What I never noticed is how adult the show really is, I noticed sexual tension between Aura and Flash in the first episode, Prince Baron is a royal prick too. I actually find this series more engaging now than I did as a kid.

My son finds it a bit dull but he's four, if you like Flash Gordon and have seen the Buster Crabbe versions then this might be the series for you. I'd almost say this is the last great series by Filmation but then I'd get angry letters from He-Man fans and really, I like that show too.....